When I read the announcement from the Washington Post weekend section for Friday July 20th to my wife, her face beamed with excitement.

“We should go this year,” she said.

“Only if the weather cooperates,” I replied.

The Post had a brief article highlighting the annual water lily festival for that weekend including music and other cultural events. My wife wanted to attend the festival last year, but something had come up and we couldn’t go. This year she thought it would be nice to go especially since her sister, an avid gardener, was visiting. 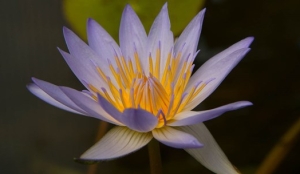 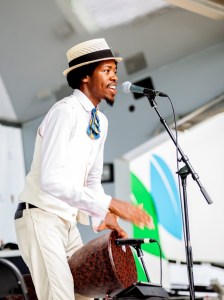 We had a lot of rain this year in the Washington, D.C. area. The month of July was no exception. We spent many days indoors and were waiting for an occasion for an outing. Going to this festival seemed like a great opportunity to do just that.

It rained all day Saturday. Not just a drizzling, soaking rain but really pouring rain. That put a damper on our plan. We couldn’t even step out of our house. By Sunday morning it had cleared a bit but was still cloudy.

My wife wondered if we could make it to the festival. The weather forecast indicated a 20 to 40 percent chance of rain.

To go or not to go, that was the question.

“Let’s take a chance,” my wife said. “What’s the worst that can happen? We may get wet a bit if it does rain. But then again it may not.”

“I don’t want to drive,” I said, showing some concern. “Especially if it rains. You know how traffic is on 66.”

Highway 66 is a main thoroughfare for travel from Virginia to Washington D. C. It is notoriously crowded at all hours of the day.

For some reason, the only thing I remembered from the Washington Post announcement from the day before was the word “Anacostia” and thought that the festival was in Anacostia Park. The park web site instructed visitors to take the orange line metro to the East Potomac Avenue station and walk south-east along Pennsylvania Avenue, cross the bridge and walk to the park entrance. There was no indication of how far the walk to the bridge was? Our assumption was it was not that far from the metro station.

Luckily it had stopped raining when we left the house. Even the sun peaked through the clouds. When we got off at the designated station and came outside on the street we noticed a nice, clean neighborhood with name brand stores but no residential buildings. We looked for Pennsylvania Avenue but couldn’t see a sign indicating that. From the multiple streets crisscrossing it was not clear on what street we were on and which direction was south-east.

There was a bank right across the street in front of us. We crossed the street to enter the bank to ask for directions. The bank was closed. It was Sunday. We saw a young man coming towards us. My wife asked directions to the Kenilworth Park. I corrected her by saying it is Anacostia Park. The young man seemed a bit confused but pointed straight ahead. Straight ahead was just a road with stores on both sides but no bridge in sight. A young couple walking their dog directed us to turn left at the next intersection and then turn right. The bridge is in that direction they said. We ended up in a quaint neighborhood of small town homes with tiny front yards.

“Who lives in this nice area,” I wondered.

An elderly woman, out for a walk with the help of a walker, looked at us. That look, I still remember. Does she think we were some aliens from outer space? I thought.

“Ma’am, Ma’am,” I said, but she just walked past us with a smirk on her face. Did my sister-in-law’s Indian dress throw her off?

A few feet away another young couple was busy planting something in their front garden. My wife asked the lady about the tulip festival. She started saying Kenilworth garden but I corrected her again and said to ask for the Anacostia Garden. We told her about the activities that were planned in the park for that weekend, as we had read in the Post. The woman, however, seemed to get the point.

“You are far away from that,” she said. “Are you folks driving?”

“Then I’m afraid it’s a good one hour walk. I would call Uber or something.”

I looked for my phone and realized that I had left it at home. I had it plugged in to charge and had forgotten to take it with me. My wife’s phone didn’t have the app and it was running low on battery.

What to do? Luckily we found our way back to the metro station. There was a city bus waiting by the curb with the engine running. A woman with a blue uniform wearing a jacket with yellow and gray stripes was strolling nearby. I thought she was a police officer.

She turned around and faced me.

“Can you tell us how we can go to the Anacostia Park across the bridge?”

“Anacostia. You know where they are having a festival with music and other things.”

“I don’t know nothing about any music, but I can take you across the bridge and show you the way to the park.”

She was not a police officer. She was the bus driver. When we crossed the bridge she told us when to get off and then pointed to her right.

“Go one block, then turn left and then right.”

As we got down we couldn’t help but notice the contrast from the neighborhood we were in just a few minutes ago. Small shops on the street looked rundown. We walked the first block and came in front of a Sunoco gas station. My sister-in-law asked if she would be able to use the restroom there. My wife took her inside as I waited outside. When they came out they didn’t look happy.

“Can you imagine that?” My wife said, irritated. “He refused.”

“You need to buy something.”

“We were willing to buy something, but he firmly said NO. He was our kind of Indian on top of that.”

“In a way it was a good thing. I don’t know how clean that would have been?”

As we walked to the next intersection we saw signs for the park. “Hurray”. But where were the visitors? There were only three of us on the entire street. A fire engine sped past us with its horn blaring, closely followed by a police car. After they passed us we saw what looked like a parking lot with a shed in the left corner. The lot was vacant except for a man reclining on a railing opposite the shed. He was immersed in looking at his phone.

“I wonder if that’s a restroom,” I said, hoping that it was.

I realized that it should have been me to volunteer to check but thought she didn’t want me to aggravate my already aching knees.

A few minutes later she emerged from the shed-like structure with her thumbs up.

What a relief it was.

We were ready to go explore the park. We approached a T intersection. Right in front of us was a white pole with a bunch of green signs. One of them pointed to the right. Kenilworth Garden, 3 miles it said and listed the activities. That was it. We needed to be there. I realized I had made a mistake.

None of us, however, had the will and the stamina to walk three miles. We didn’t even want to call a taxi in an unknown neighborhood, especially when there was nobody around.

“Oh, well.” My wife said. “Looks like we should just head back home.”

So, back we came taking the bus and the metro. The day had been dry and partly sunny.

“At least it didn’t rain and we had an outing.” Surprisingly my wife didn’t appear upset. “It was getting boring staying inside all the time.”

We compensated by having a hearty late lunch at the local Silver Diner.

I was curious to check what the Post announcement had stated. So I dug through the recycle bin and pulled out the Friday’s weekend section. I wanted to know the difference between the Kenilworth and the Anacostia gardens. Weren’t they the same? The article in the Post had mentioned Kenilworth Garden along the Anacostia River. Anacostia River is what stayed in my mind and I assumed that the festival was in Anacostia Park. I read the article further and found out that if only we had got off at the next station on the metro, the Deanwood station, we would have been at the correct place. They also had free shuttles from the station to the lotus festival a mile away. If only I had double checked before leaving home that morning.

“I’m sorry,” I admitted. “You were right. We should have gone to the Kenilworth Garden.”

“It’s okay,” she said calmly and with her ever positive attitude added, “We at least had an outing. For next year, we now know what to do.”

Author’s note: The photographs in this article are from the Kenilworth aquatic garden website.

6 thoughts on “Importance of checking and checking it twice”