I self published my first book this year (2018) on May 1st. It is available on Amazon in paperback as well as on Kindle. The name of the book is “Choices They Made.” 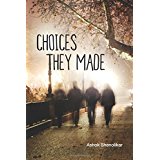 It was the culmination of a few years of effort. About four years ago I wrote a short story called “What did you say your name was?” It was about two young people who met at the University of Oklahoma. One of them whose name was Ashley was a graduate student in search of a room for rent. He meets Owen, a biology major undergrad, who tries to help him out. To make the long story short Ashley becomes a Professor and Owen goes on a tour of duty in Vietnam and then joins the Peace Corps in Malawi, Africa. They meet thirty years later at the Montego Bay airport in Jamaica and get re-acquainted.

I thought I should try to expand this story into a book length version. I asked myself “what if?” questions. What if Owen meets a poor person in Malawi? What if to get over the poverty this person experiments in growing cannabis? What if Owen, who is a runner, becomes a pediatrician and develops a debilitating condition? What if his condition can be cured by use of cannabis?

I had no detail knowledge about what Peace Corps volunteers do or what is the realty and tragedy of poverty in Africa and the plight of poor farmers. I read two books on Peace Corps volunteers and a book describing the annual “Hunger Season” in Africa. I developed a story line for Owen’s life during his stay in Malawi. I created a character of Demond, son of a poor and illiterate farmer.

I had enough to go on to develop a novel length story. In the novel Owen, Ashley and Demond come across each other and their lives take an unexpected turn. The members of the Northern Virginia Writer’s Guild, which I manage, critiqued the earlier chapters. Since we meet once a month it took me almost two years to come up with the final version of the stories.

I was sure I had done all I can and decided to go to a professional editor to give it the final touches. Through personal recommendation I contacted Kathryn, who teaches at the Bethesda Writer’s Center. I eagerly awaited her feedback. Kathryn was very prompt and came back with a three page critique. She stated that even though I had compelling characters and had dealt with contemporary issues, I needed to do several things for the book to be in a reasonably good shape for publishing. She emphasized the need to create vivid scenes, to keep the time frame of the story short (my story spanned thirty years), not to make sweeping statements like “over time Ashley got married and had three children.” She gave me two options. Option one was to develop the story into a full length novel (meaning three hundred pages or so to cover the details of the story related to each character over a thirty year period). Option two was to break it into connected stories, each covering a short time frame.

I opted for the second option. Over the next year and a half I re-plotted the stories and each time Kathryn reviewed them and guided me to make them believable. I learnt an important lesson that if a story does not have tension and if the protagonist does not struggle to achieve his goal there is no point to the story. I worked hard, but in the end my stories came out far superior to when I started.

I thought I was done. I was not sure if I should publish, but after I had invested so much time and effort it was worth a try. I read about several options and concluded that using Amazon’s CreateSpace was a safe bet. Even though the CreateSpace web site has a number of tutorials for do it yourselfers, I purchased a book CreateSpace & Kindle Self-Publishing Master Class by Rick Smith. This was of immense help. Meanwhile my journalist son recommended that I need to get my manuscript copy edited.

“But, it has already been edited,” I said.

“Still. It’s better to have someone else look it over,” he said.

Again I researched several sources for a copy editing service. Reedsy was a good source. I contacted three editors but couldn’t find a satisfactory one. As a last resort I signed up for the Amazon editing services. The price was reasonable and it was a name brand. How can I go wrong? Within a week I received a document with track changes. The editor found several areas that needed fixing, such as incomplete dialogue, minor punctuation. It was possible that these errors crept in when I added new material. CreateSpace has since discontinued this service.

I waited a week after making these corrections. I ordered proof copies. Was I ready to publish? I thought I was, but my wife said “What’s the rush?” She was right. I didn’t have a publishing deadline. I was self publishing. After another week I requested my good friend Shekhar, who is an avid reader, to please take a look and let me know if everything was okay?

Two weeks go by and I get a spread sheet with page numbers and line numbers where he found discrepancies. For example, I had used the word “waive” instead of “wave.” He had recommended that I change dialogue to be grammatically correct. I left it as is because the dialogue needs to be how people speak. I had the same issue with referring to God as “Him” or “him.” My research indicated that both were correct.

After making these corrections, I ordered another proof copy. This time I thought I was really done. My wife finally decided to read it after many requests. Surprise, surprise, she thought a few things just needed to be changed. For example at one point my protagonist Owen and his girl friend Rachel are in a shop. Rachel wraps a scarf around her head and asks: “What do you think?”

My wife thought that it should be in present tense for it to be stronger and realistic because he is right in front of her. She was right. I read the manuscript again and found that my dates were not in synch with my narration.

There I go again with ordering another proof. This time, I was definite that that was it. I was ready to push the button to “publish.” My wife was not in a rush.

Just to make sure there was nothing missing my wife and I sat in front of each other on a table. I had tagged all the pages that needed revision. Page by page we reviewed all the changes. Lo and behold there was one place where a question mark was missing.

I was getting frustrated. But it is better to fix everything before the story goes public. It is no wonder that there is so much material out there that is not checked. Some people are in a rush to just put something out there and say they are a published author. The reality is that one needs to work really hard to do the best they can to see that the manuscript they put out is the best it can be. The readers will notice the difference, and that is the key. There is a lesson to be learned by all would be self publishers. “What’s the Rush?”