After two hours of frantic search, I couldn’t find it. I sat down, tired and disappointed, at the breakfast table with a glass of cold water.

The “it” was a Kindle Paperwhite, a gift we had bought for my daughter, Sukanya, for Christmas. The one she so wanted. There was a sale going on on Amazon for a limited time. When I ordered it, we had to be in Indianapolis to see our new granddaughter. So, I had Amazon deliver it there, in case it is delivered at our home in Fairfax, Virginia, in our absence. I took care to bring it back with me in my backpack and not place it in the luggage.

We usually place all our gift purchases on the large table in the formal dining room. They stay there until we are ready to wrap them, maybe a day or two before Christmas. This year was no exception. We were a bit concerned about leaving the Kindle there in open view. Our home cleaning crew is reliable and honest. They have been cleaning our home for the past seven years. But one never knows. Why take a chance? I decided to keep the Kindle in a safe place. A place not easily visible, but also not that inaccessible. My wife, Bharati, had started to wrap the gift and was looking for the Kindle, and I didn’t remember where I kept it.

“I distinctly remember you take it in your hand and walk towards the family room. Also, you had said. ‘I will keep it inside.’”

“Yes. I remember it too.” I said firmly. “I am sure I placed in on the top shelf of the armoire that is in the right-hand corner.”

“Then look there first,” Bharati said.

I opened the armoire, and I couldn’t see it.

“I don’t even know how it looks like, that iPad.”

“Whatever, I don’t know how it looks.”

“It’s like a thin book. Not that large, but not that small either.”

Now, I didn’t precisely remember what color it was when I took it out of the Amazon mailer envelope.

“I didn’t see any green thing on the table.”

I was sure I had kept it the armoire. The armoire has a section in the center cabinet with a large cutout for a TV. We don’t keep our TV there anymore since we now have a large flat-screen TV mounted on a wall. It was entirely possible that something could have fallen from the gap and on to the floor behind the unit. I went to the laundry room, where I keep handy tools. I picked up the lantern style flashlight to see through the dark corners of the armoire. I hated bending down to the ground level to look under and behind the armoire with no success. I took out all the photo albums, boxes of old tax returns I had saved, Bharati’s knitting projects.

“Why am I doing this? I know I kept the Kindle right on top to be visible.”

“Take a look in the library,” Bharati said. “Maybe you kept it one of those folders in the desk.”

I knew it was going to be a waste of time. But I looked there anyway. I opened all the hanging folders in all the drawers. I ran the flashlight over all the books in the bookcase, just in case I hid the Kindle among the books.

It was a long shot, but I even walked upstairs to our bedroom and examined all the shelves in the nightstands and the dresser.

“I hope you didn’t throw it in the recycle bin,” Bharati said.

“And why would I do that? I always take a second look before throwing anything. And why does it have to be me to do stupid things.”

I realized I was losing my mind.

“I was just considering the possibilities.”

“What else? Where else could it be?”

Not to leave any stone unturned, I went to the basement and looked through all the compartments of the bags we had carried to Indianapolis. I did the same thing with the backpack. Nothing. Not a trace of the Kindle.

“What do we do now?” I asked dejectedly. “And it’s not that cheap, not that expensive either, but not cheap.”

I was trying to make a statement.

“It’s not the money. It’s all the thing we have to go through. Buy it again. Maybe it wouldn’t be on sale anymore after Christmas.”

Bharati tried to make some sense out of the whole thing.

“And, what good it would be if we couldn’t give it for Christmas.”

“Well, some things are out of your hands,” Bharati said. “We just have to accept it.”

“It still frustrates me. Maybe we should not be too careful, too paranoid in the future.” I said.

“You know, it may be right in front of us, and we are just not recognizing it.”

So, I am sitting at the breakfast table. Sipping the cold water and re-reading the op-ed columns from the Post. There was nothing else to do.

There was silence in the house. Then I heard Bharati say something from the dining room.

“Did you say something?”

“You wouldn’t believe it,” She shouted.

She walks over with the Kindle in her hand. THE KINDLE.

“I don’t believe it. Where did you find it?”

“It was right on the dining table. In the Macy’s bag.”

While I was searching for the Kindle all over, she was busy wrapping the gifts. The only thing remaining was to wrap the stuff in the large red Macy’s bag. When she removed the sweaters from the bag, what do you know, the Kindle was lying at the bottom. Safe and sound. It was blue, not green, with the black and white picture of the unit. 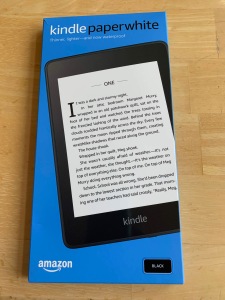 “For goodness’s sake. How much time did we spend looking for it?”

“Maybe two hours or so.”

“And losing our mind over it.”

“Well. Think positive. We are going to have a merry Christmas after all.’